The AK-74 (Russian: Автомат Калашникова образца 1974 года or “Kalashnikov automatic rifle model 1974”) is an assault rifle designed by Soviet small arms designer Mikhail Kalashnikov in 1974. It is chambered for the 5.45×39mm cartridge, which replaced the 7.62×39mm cartridge of Kalashnikov’s earlier automatic weapons for the Soviet armed forces. The S in AKS-74U stands for Skladnoy (складной) which means ‘folding’ in Russian. This is due to the AKS-74U’s folding buttstock. The U in AKS-74U stands for Ukorochenniy (укороченный) which means ‘shortened’ in Russian. This is due to the AKS-74U being a shortened AK-74 and that carbines are usually shortened rifles.

The AKS 74U is one of the most popular blasters around, if you’re an enthusiast or purchasing your first gel blaster, this is a great blaster to have in your collection. 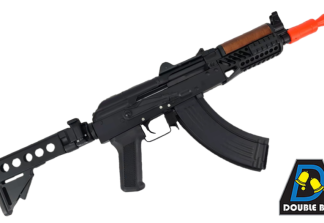