The AK-105 is a shortened carbine version of the AK-74M rifle, which in turn was derived from the original AK-47 design and its successor, the AK-74. The AK-102, AK-104, and AK-105 are very similar in design, the only difference being the caliber and corresponding magazine type. The AK-105 is chambered to fire 5.45×39mm ammunition.

Compared to the AK-74M, AK-101, and AK-103, which are full-size assault rifles of similar design, the AK-102, 104, and 105 feature shortened barrels that make them a middle ground between a full rifle and the more compact AKS-74U. However, the AK-105 also features a solid, side-folding polymer stock, unlike the shorter, skeleton-stocked AKS-74U. The AK-105 uses an adjustable notched rear tangent iron sight calibrated in 100 m (109 yd) increments from 100 to 500 m (109 to 547 yd). The front sight is a post adjustable for elevation in the field. Horizontal adjustment is done by the armory before issue. The AK-105 has a muzzle booster derived from the AKS-74U.

The 100-series AKs are produced by the Izhmash factories in Izhevsk, Russia.

The AK is one of the most popular blasters around, if you’re an enthusiast or purchasing your first gel blaster, this is a great blaster to have in your collection. 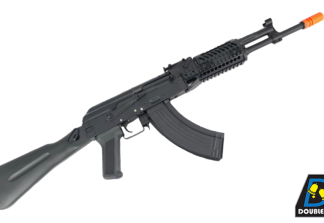