In the early 1960s, the Romanian Army used mostly PPSh-41, Oriţa submachine guns and imported AK-47 rifles. With the development of the stamped Type 4 AKM receiver, and the Soviet Union’s call to each of the Warsaw Pact’s nations to produce their own assault rifles chambered in 7.62mm, be they AK-47 pattern or not, the Romanian State Arsenal developed an AKM clone featuring a forward-pointing front handgrip molded into the lower handguard, called the Pistol Mitralieră model 1963.

The md. 63 series proved to be a very successful design, combining affordable production costs with reliable operation. Recognizing a need for a more compact variant, the Romanians set about developing their own AKMS underfolder version of the design. The result was the 7.62x39mm Pistol Mitralieră model 1965, or PM md. 65.

The AK series is one of the most popular blasters around, if you’re an enthusiast or purchasing your first gel blaster, this is a great blaster to have in your collection. 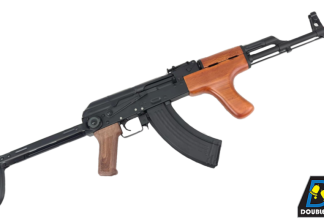