The Mk 14 Enhanced Battle Rifle (EBR) is an American military selective fire battle rifle chambered for the 7.62×51mm NATO cartridge. It is a variant of the M14 battle rifle and was originally built for use with units of United States Special Operations Command, such as the United States Navy SEALs, Delta Force, and task specific ODA teams/units. These weapons are made for both the designated marksman and the close combat roles.

It has now made it’s way into the gel blaster scene and for those fans of the MK14 this is a pretty nice bit of kit. It has a solid nylon built and running a inline gen 8 style gearbox. Shoots around 220 FPS at a distance of 25m. 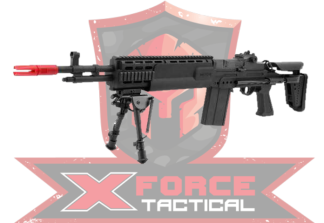